Hello, welcome to AnneBrontesgrave.co.uk, the place to be for everything you need to know about the lesser known of the Bronte sisters. Here you will find information on her life and works and an insight into her creative family.

Although Anne Bronte is not as famous as her sisters, this does not mean she was any less talented, a fact that shines through in her work. ‘Agnes Grey’ and ‘The Tenant of Wildfell Hall’ are credited to Anne, as well as a many poems, but she als 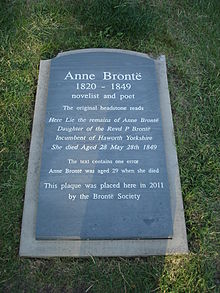 o collaborated on several works with her sisters Emily and Charlotte, and on occasion brother Branwell also. Originally published under the pen name ‘Acton Bell’, if you are lucky enough to find a rare edition of any of her works credited to the original pen name then treasure it.

Having been born and raised into an extremely talented family, Anne was destined for greatness. She had the world at her feet, but sadly lost her life at the tender age of 29, having never reached the global recognition she so much deserved during her lifetime.

Luckily for us her works live on and they are now considered to be some of the best loved classic novels around. There have been TV and film adaptations of Anne’s work which would have been far beyond the wildest dreams of any member of this family of creative geniuses.

So, come with us, let us take you on a journey into the past, into the life of the youngest Bronte sister, and see the world from her eyes.