Anne Bronte’s talent as a writer is often overshadowed by that of her sisters but she wrote two novels which were well-received as well as a large number of poems. Em 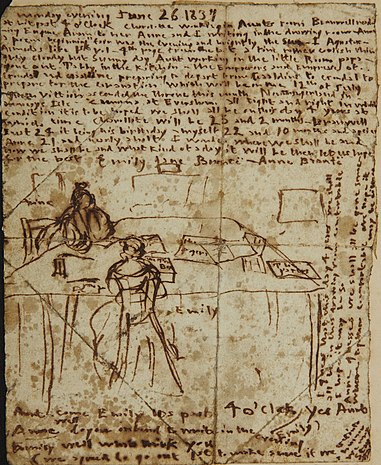 ily Bronte has often been considered the better poet but it was Anne who first enjoyed success as a poet. In 1848, two magazines published ‘The Narrow Way’, although this was under her pen name of Acton Bell. Her poem ‘The Three Guides’ had already been published a few months earlier.

Anne’s poems are often divided into two categories. These are the Gondal poems and the non-Gondal poems. Gondal was a fictional world that she created with Emily and they created prose about it as well as poetry.

The themes of her non-Gondal poetry varied from the loneliness and depression she experienced while working as a governess at Thorp Green, although at happier times in her life she also wrote about love and religion, with many people believing that she chose her poetry as a way to express her feelings for William Weightman, her father’s curate.

There is a total of 59 poems by Anne Bronte remaining. 23 of these poems fall into the Gondal category and the rest are often read by experts as an insight into her mind and emotions.

It should also be remembered that Anne wrote several hymns, with some still being used today. ‘The Three Guides’ is used by some churches as a hymn. Those who venture to a church service at Haworth will find that some of Anne’s other poems have been set to music and are now used as hymns.

21 of Anne’s poems were included in the published work with her sisters although alterations were made to them at other times as she honed her writing. Her first known poem is ‘Verses by Lady Geralda’ written in 1836 when Anne was just 16 and the last was ‘Last Lines’, written early in 1849.